“You wouldn’t happen to know what century it is would you? You see, I’m lost and you don’t speak any English….uh. How would you like to sit on my face?”

And we’re off with the 1985 comedy Cavegirl. This one is a rough one folks. A real rough one.

I knew of Cavegirl back in the day, but missed it during its ’80’s initial run, so this was a teen/sex/comedy film that I finally got to catch up on. Oh boy.

You know, it’s not like I have high standards for this genre, but I think even had I seen this back in the day, during my ‘soft-brained-adolescent-if-it-shows-boobs-it will-be-good-age’, I still would have thought it sucked.

So, the story is even simpler than the average teen/sex/comedy – and even more ludicrous.

Geeky high school nerd Rex (Daniel Roebuck) is out on some sort of school field trip, he wanders into a cave, touches this mysterious crystal and miraculously travels back to the stone age where he meets sexy cave girl Eba (Cynthia Thompson). Completely blown away by this sexy cave girl who has taken a liking to him, Rex spends the next hour of the film trying to have sex with her. He also has to deal with a dumb tribe of cavemen who always get in the way of him getting it on with Eba.

It’s not all fun and games in this prehistoric world though. A tribe of cannibals attack the friendly cavemen, they capture Eba and are ready to cook her up. Now it’s up to Rex to man up and save his cavegirl! That’s really pretty much it. No kidding! That’s the movie. Getting back to his own time aren’t that big of a deal and aren’t a big concern. That stuff will work itself out. The important thing is getting it on with this cavegirl and revealing Thompson’s breasts to Roebuck and the audience.

That moment should have been the climax of this movie.

Cavegirl was directed by David Oliver Pfeil who also wrote it, along with Phil Groves. It was made by Crown International Pictures. Crown was known as the studio that brought us Galaxina, The Pom Pom Girls, Jocks, My Tutor, Malibu Spring Break, My Chauffeur and Tomboy. As you can probably tell just based on those titles of what kind of film fare they offered audiences.

Cavegirl starts with us meeting Rex and watching him get pranked and bullied by his classmates. It’s a bunch of juvenile unfunny humor. It’s not really entertaining. Although Rex does get tricked into walking into the girls locker room and a bunch of topless girls chase after him. We get that bit at least.

Rex wears a tan fedora the whole time and I thought maybe it was meant to be like an Indiana Jones thing. Like, it’s meant to signal to us the guy is really into history and archeology, but I’m not sure if we’re meant to make that connection with that wardrobe choice. There’s no Indy spoofs in this. Rex doesn’t run away from giant rolling boulders or anything like that, but he does wear that hat throughout his adventure. For reasons that I don’t understand, and I don’t think the film is worried about explaining very well either, Rex goes into this cave and pops out in prehistoric land. Very quickly he meets Thompson, he starts to try communicating with her and he starts to feel her up. He’s not exactly as awkward a nerd as we first see. Rex comes off as a bit of a pervert.

I have to admit, Roebuck and Thompson are both oddly likable in what they’re given to do here – which is essentially her acting all innocent and him trying to position her for some sex the entire time.

Roebuck acts the goofy part, which he’s fine at. He does a lot of the exaggerated acting that I suppose fits in with the premise and he functions quite well with what he’s asked to do. It must have been a good gig to get for him at the time. Thompson is very attractive and has a nice genial, sexy aura about her. She pulls off the innocent charm this Eba is mean to have. It’s pretty much a one-note character, but she does it as well as any actress could for such a silly film. I could see why young movie watchers would be completely smitten by her. She is easy to watch.

She is quite the looker and I don’t think resembles what a real cavegirl would really look like. Shocker! This movie took liberties with that! It could make for a fun debate on who is the more accurate cinematic prehistoric cavegirl Thompson or Raquel Welch in One Million Years B.C.

I definitely think both of them would have had themselves etched on many caveman walls. They’re both deserving of being prehistoric pinups! They both would have had fan clubs.

Cavegirl might be one of those flicks scientists or archeologists watch when they get together, have some drinks and just want to laugh at a bad movie. They’re probably rolling on the floor laughing and having a grand old time pointing out the scientific inconsistencies with it.

Anyway, my initial prediction would have been I’d be watching an annoying young male lead and a vacuous blonde bombshell engage in silly antics for 90 minutes. And the silly antics are indeed there (SQUARED!) but the two of them almost, just barely made it bearable.

Even if Roebuck does get kind of creepy with his continued persistence of trying to get it on with this Eba.

Had this film done a bit of the reverse with Eba traveling to modern day 1985 it probably would have provided more ammunition for a story and some gags. There’s really not a lot for Rex to do in this stone age setting. He seems to be getting along quite nicely and the comedy is really hard to come by.

Now had they made Eba adapt to the 1980’s setting, more laughs and scenarios could have been gleaned from that. Sort of like a female version of Encino Man. We could watch a montage of her trying on clothes, decking the bullies who pick on Rex, taming wild animals at the zoo and the ‘must scene’ of her learning some dance moves.

The whole school would be dazzled by this new girl in school who just won the archery contest and is the new prom queen! What does she see in this dork Rex? And why doesn’t she talk much?

Ah, what might have been. They probably didn’t have the budget for something like that and were just forced to shoot this movie in this mountain area and do what they could with it.

Still, neither Roebuck or Thompson ever gets so overbearing with the repetitive, insipid gags that had me hating on them. This might be faint praise, but I mean it as a compliment. Two lesser charismatic leads would have made this a total dog of a movie. It’s a dog of a movie, don’t get me wrong, but they both come out of it surprisingly unscathed.

I can’t say the same for the rest of the cast. The other cave tribe are meant to provide a lot of laughs and no, no they don’t. It’s becomes basically an endurance test of how long they can try to milk a joke, which is barely funny from the start, to fill as much time as they can. So, we watch the cavemen grunt, smell shoes, eat lice from one anothers hair. There’s the tried and true pratfalls, getting hit in the head, being mesmerized and entertained by some of the modern day crap Rex brought along, like shaving cream. The cavemen try to eat it and spray it on themselves and laugh. That scene felt like it went on long enough that we moved onto present day.

At first I thought this caveman tribe was going to be the high school actors from the beginning recast as their neanderthal counterparts. Like a duel role for all them, but nah. I guess that would have made things too confusing.

There’s not a lot of going on and the film tries to fill the gaps between Rex’s failed attempts of getting Eba naked with incredibly drawn out sight gags and uninspired jokes that desperately try to be funny. The movie is only 82 minutes, but it feels like it drags on much longer.

There is some unintentional laughs when Rex and Eba become separated from one another. This is meant to lead to their big blooming ‘getting it on with one another’ session. A classic 80’s montage begins with them longingly looking for one another. There’s dissolves, sad faces, backlit figures searching for their soulmate. It’s really quite horrible and the funniest part of the movie.

Cavegirl was clearly made on the cheaper side. It looks like it was filmed in some remote mountainous area. It looks drab and boring. I imagine the filmmakers biggest hurdle was to film without any hikers walking around in the background. That would have made it more amusing actually, watching park-goers playing and walking past the camera in this romantic prehistoric tale. At least that would have been something to point and laugh at throughout it.

The best thing about it is Thompson in her cavegirl outfit looking really sexy. You don’t need to sit through the movie to see that though, just google an image of her. Yeah, even the appearance of her boobs can’t redeem the movie.

Unfortunately, Thompson’s career didn’t go much further. She would appear in several B-movies, including Tomboy, but retired from acting in the early ’90’s. Sadly, she died in 2009.

I imagine, to millions she’ll always be remembered as the fetching Cavegirl Eba.

Roebuck went on to bigger and better things. He’s become a prolific character actor and director. I’ve heard recent interviews with him and he seems to take his Cavegirl job in stride and has a realistic perspective of what kind of movie it was and the quality of it. It appears he was just happy to get the job early in his career and was confident he’d move onto better things, which he has.

Roebuck has embraced the legacy of Cavegirl, appreciated what an opportunity it was for him at that early stage of his career and has a great sense of humor about it. He even wrote and directed a 2013 documentary titled Cavegirl, A Second Journey Back In Time, which looks back the filming with interviews of those who made it. It’s quite an entertaining doc and no one tries to make the film out more than it actually turned out to be.

Everyone apparently had a great time making it. Watching it….well, that’s another matter. 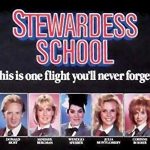