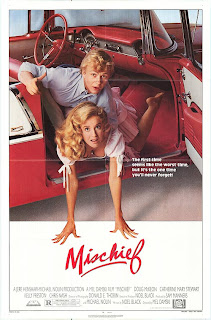 “I can’t do it.”
“Shit Jonathan where’s your sense of adventure?”
“Hiding behind my fear of humiliation.”
“You got nothing to lose but your cherry.”
“I’ve gotten attached to it after seventeen years.”

Mischief isn’t the typical 80’s teen comedy from the usual gratuitious crop of films. One could argue that it stands apart from the genre.

Yes, it’s got the usual things one might expect to see – our main character is a virgin whose ultimate goal is to go all the way with the girl of his dreams, there’s nudity, some slapstick. But here you won’t hear any 1980’s songs running throughout it and it’s classier than you might expect.

Will this joining of geeky Jonathan and rebellious Gene help each of them find what they’re both looking for and make them better for it? Rewatching Mischief and it’s better than I remembered. It’s not overly silly and never gets outlandish. Although, Back To The Future sent Marty McFly back to the 1950’s the same year, the setting helps distinguish Mischief from the majority of teen films from this period.

I really enjoy the surroundings, the production design and all the details the film sprinkles throughout it – the malt shop, the drive-in, the small town, the movies and naturally the music. I found it pretty funny how Jonathan has a Hop-A-Long Cassidy alarm clock. It sells the era very well.

The mid-50’s setting adds more of an innocence to the search of sex for Jonathan compared to the contemporary films of the 1980’s. They would typically have more vulgar characters running around, there’s more of a forced attempt to get boobs on the screen and they’d have much more exploitative sex adventures than anything that Mischief has.

The characters actually have more going on than just scoring with the girls they have their sites set on. The town bully Kenny (D.W. Brown) continues to plague Jonathan, now with Gene around perhaps he’ll learn how to be more self-assertive, come out of his shy shell and learn to stand up for himself.

Everyone perceives Gene as a loser. However, we slowly learn at home his relationship with his father (Terry O’Quinn) is strained since his mother died and now Gene is verbally and physically abused by his Dad. The film slows down between chasing the girls to have the guys try to tackle these issues.

For a film that was advertised as another teen sex romp, one of the most surprising things in it is the focus on the friendship that develops between these two radically different 50’s kids.

The cast are all good. McKeon is a very likable lead. I would have thought after his role in this he would have gone on to more film work, but other than Mischief and On Golden Pond I can’t remember seeing him in anything else. Same with Nash. I know he continued acting, but I can’t recall seeing him in any other films besides this one.

Catherine Mary Stewart was one of the popular 80’s young actresses and this was one of her more notable films (The Last Starfighter and Night of the Comet were her other two biggies). Jami Gertz shows up in a small role. She plays one of those ‘geeky’ girls who you’re supposed to think is unattractive because she’s wearing glasses and has braces, but it’s clear you would cut off your arm to get a chance with her, even if she is a four-eyed metal-mouth. The most famous and most talked about scene from Mischief is the young Kelly Preston completely disrobing in the famous sex scene. Clothed she looks hot and seeing her in all her exposed glory she doesn’t disappoint.

Yet, even without the nudity it ends up being a very awkwardly funny scene. The nudity in the film is presented in a more innocent fashion than just being a titillating nude shot.

So overall, it’s a pretty good flick. There’s certainly nothing ground breaking about it, but it’s entertaining and tells the story well with an interesting pairing of characters. It’s all played with earnestness and it holds up very well. I would say it’s on the better end of 80’s teen sex comedies…..if I were to categorize it that way.