When one describes the sound of James Bond they usually mean John Barry. Barry the legendary composer who scored dozens of film died January 30th 2011.

Barry’s talents made a distinctive mark in films ranging from The Lion In Winter, Midnight Cowboy, Robin And Marian, The Black Hole, Body Heat, The Cotton Club, Out Of Africa and Dances With Wolves. He won five Academy Awards and four Grammys. His death is a real blow to cinema fans, however, he will probably be best remembered as giving the Bond film series its unique sound.

His rousing compositions elevated the series and set a standard for the films to follow. The music in a Bond films became an integral ingredient to the franchised that fans expected to hear. Large, exciting orchestrations would punctuate action scenes, romantic, swelling pieces for love making and loud, brassy sounds would make up the title sequences.

I have often listened to his Bond compositions by themselves and not only do they work wonderfully in their respective films, but they are beautiful to listen to on their own. Since 1987 when Barry was last part of a Bond film, the scores have never been as memorable as when he was at the helm and I had always hoped he would return.

Whether it’s fair or not, no matter who future composers are that work on the films, Barry will always be the one most closely associated with the Bond series. Even if the films continue for the next hundred years, when one reflects back on the great Bond music the first name they will always think of will be John Barry. 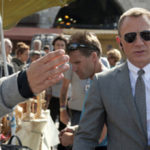