A group of mercenaries take control of a Georgia dam. Holding hostages, it’s hazy what exactly they want. That is, until their leader (Bruce Willis) begins opening the gates to the dam threatening a nearby town to be flooded.

Everyone’s sole hope in stopping this disaster rests on a retried army ranger who has been working at the dam. He attempts to kill the bad guys, stop the flooding and rescue the hostages!

Deadlock is just one of the bucketload of films that Willis has made in his final years of acting. It’s a low-grade actioner with nothing really going for it other than having Willis in the cast. Although, compared to some of the other B-movies that he’s done in recent years, I would have to say Deadlock is a bit better than the usual crop of direct-to-streaming junk that has his name on it.

That’s not to say I think it’s in any way worthwhile, just in comparison to some of the other latter movies Willis has made, it’s not the worst of the lot. I know, it’s faint praise.

All have these low-grade movies Willis has done all have these ‘cool’ action-y type names – Apex, A Day To Die, Survive the Game – and they’re all pretty much unwatchable garbage. If you’ve seen any of them – better that you don’t – you’ll understand.

The only attraction is that Willis is starring – or more like ‘appearing’ in them. His involvement is used as the selling point, since they don’t contain anything else worth mentioning.

Fans have learned the reason why Willis has been doing these subpar films and why he looks so listless in them, when the news came out he was suffering from aphasia and he would be retiring from acting.

For the last few years, while dealing with issues with his memory, he took on an assembly line of acting jobs that were not demanding and would pay big. Signing deals with schlock producer Randall Emmet, they’ve churned out a chorus line of forgettable, B-grade flicks, that Willis at his height of his career, wouldn’t even flinch at turning down.

But things changed. Rather than lengthy shoots and demanding performances, Willis would don an earpiece, recite his lines, shoot his scenes for a day or two (in some instances only a few hours) and earn a cool million bucks or two. The films would then be filled in around his small scenes and his name and face would help sell and promote them. It’s a pretty bizarre partnership, but beneficial to both Willis and Emmett. Willis would make a quick payday and Emmett would have a product with a high-profile star to sell around the world. Willis fans hoping for a quality, entertaining film from him would be the only ones getting the shaft.

Alas, that’s exactly what Deadlock is. It might seem like an interesting take watching yet another Die Hard knock off with Willis playing the villain, but it’s not. It’s a disposable, forgettable action yarn, with nothing remotely interesting happening from start to finish.

I would say it’s better than some of the other whoopers that have been made using his name to cash in, but let me reiterate that’s not an endorsement that you should rush out and watch this.

So Willis’ son is killed in a botched raid by the local police. Angry, he decides to take over the dam/power plant and make those responsible be forced to own up and admit to their wrongdoing in his son’s death. Any innocents that get in the way are just collateral damage in his mind.

What do you know, a local school has scheduled a field trip to the dam on this particular day too! So there we go, a lot of hostages. There’s the hero of our movie Patrick Muldoon, who is running around the facility. He does the standard Die Hard thing of navigating hallways, climbing through vents and taking out baddies left and right, making his way to the big boss – which we know will inevitably come.

Muldoon also has a strained romance of sorts with a woman who also works at the plant, making this a personal mission to save these folks. That relationship isn’t given much time to explore or give the story any weight, so it’s barely worth mentioning. He’s also given a sidekick in the form of a new security guard. Again, his character is not really worth getting into.

This is a very basic connect-the-dots actioner. From reading the synopsis you should know exactly how things are going to unfold and you’re going to be correct.

There’s really not much to say about Deadlock. The action is at best very average. Muldoon provides the action hero excitement. He casually runs around shooting bad guys, to the point where it just feels like he’s at a carnival shooting wooden ducks.

None of the shootouts or fights have anything special about them that make them memorable. It’s incredibly routine and by-the-numbers. It’s just see a bad guy, shoot them, they fall down or maybe sometimes fall from a high place. The whole thing is shot in that handheld style with a grainy look to make it appear to be a hard-edged actioner. There are some shots of the dam with its water spilling out that momentarily gives the the film the illusion that this is a real pricey production, but then there’s obvious stock footage of flooded town and helicopters that stick out badly and bring you back down to reality of what you’re watching.

Willis is in this more than some of his other ‘Geezer Teaser’ films he’s appeared in. He doesn’t just pop up three times in the movie like in most of these. He does remain a consistent presence. Although, he mainly sits in the control room among his men during the duration, barks out commands and threatens some hostages. He doesn’t have any fun with his villainous turn. I thought I noticed a real gruffness to Wills’ voice in parts of this. I’m not sure if that was actually him or it was just some bad re-dubbing that was done for him. These films have been notorious using body doubles and dubbing for Willis, so maybe that was it.

There was one real bizarre moment when Willis takes off his baseball hat – I could’ve sworn I heard the sound of a suction cup accompanying it! I’m not kidding!

Luckily for Willis, this crop of low-grade movies will not be remembered. He’ll forever be known for the quality films and roles he’s done – Die Hard, Pulp Fiction, The Fifth Element, The Sixth Sense, Moonlighting. All these cheapie movies he’s done will become a footnote. 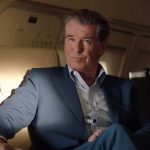