John Candy is Jack Gable, a New York writer for a successful soap opera. He has his hands full dealing with the shows producers who aren’t too happy with Jack’s new upcoming storylines and characters he wants to introduce into the show and now they’re looking to use a rival writer. They even want to kill off the character played by Rachel Hedison (Emma Samms). She’s an arrogant, selfish actress who Jack is completely smitten with. Hoping that he’ll have a chance with her, Jack is willing to embarrass himself and pamper this soap diva anyway she desires.

Jack is having plenty of headaches with the show and Rachel. Then one day when he gets clonked on the head he awakens to find himself in Ashford Falls – the fictional soap opera town that he created! All the characters are there, all their storylines are in place and all the once flat sets are now a reality.

When Jack discovers he can actually control this wacked out soap world he’s now living in by just typing the story out on his typewriter he decides to write himself the most heroic, desirable role he can imagine to make all his fantasies come true.

This should be a lot of fun! It should be, but sadly Delirious isn’t as funny or inventive as its premise. It’s not even as wild and goofy as its title would indicate. It’s a very average comedy that never utilizes the unique high-concept fantastical idea for much of anything and you probably won’t remember it soon after seeing it.

Hearing the synopsis I pictured silly over-the-top dramatic situations our comedic star finds himself in. A skewering of the daytime and nighttime soap genre and mining the comedy from how ridiculous it can be. A bizarre learning experience for our main character who after going through this dreamlike adventure is taught an important lesson.

There’s elements of all that in Delirious, but it just never all gels together to make this as good of a comedy it could have been. Candy was one of the most likable comedic actors around. And throughout the movie I’m rooting for him, but he doesn’t have much to work with here.

When he learns that whatever he types will actually happen in this fantasy town it does result in some payoff scenes. Watching him heroically save Samms on a horse, acting like this super cool mysterious stranger in front of the soap cast or getting into outlandish fight scenes is the most satisfying stuff.

There’s also quieter tender scenes between him and Mariel Hemingway. They’re supposed to play as very genuine and romantic and give the movie a bit of heart. That’s the lesson this visit is meant to teach Candy – forget the bad girl Samms and go with the good girl Hemingway. It’s very predictable and really not all that interesting.

When I first saw Delirious I was very disappointed. I always thought it had so much more potential. It could have been a much more outrageous Groundhog Day-type of comedy. Maybe not as good as that film is (which would be released two years later), but somewhere in the same vein and do something real imaginative with it’s soapy surreal dream setting.

The movie misses so many marks it gets frustrating. The opportunity of burning down the soap opera genre is a real biggie. The film could have escalated all the outrageous soap devices to such ludicrous, hysterical levels.

Have a big wedding, who shot this person mystery, the big Dynasty massacre cliffhanger, the pompous performances, the catfights, all those sensational storylines the soap genre did throughout the 1980’s. Then you have Candy sitting in the middle of it all writing himself a primo part that he’s relishing playing. There’s a wealth of humor that this movie could be filled with.

Compliment it all with that corny soap opera music to punctuate scenes. Admittedly, the film does use that gag in some spots, but they could have gone much further with it. Also the movie never really does a contrast with the real life actors working on the soap ‘Beyond Our Dreams’ and the characters they play in the show.

Samms and Hemingway are really the only ones we meet before being dropped into the fictional world and they’re pretty much the same as their real world counterparts.

Maybe it would have been better had we met all of the actors at the beginning who work on Candy’s show and see them out of character. We see they’re complete opposites of their soap roles, then when we get to Ashford Falls and see them in character reciting overly dramatic dialogue and acting all serious it becomes a joke by itself.

Another idea could have been casting more real soap stars who are known to play melodramatic characters and are associated with the soap genre to populate this fictional show. Then we could have fun watching them spoof all the conventions of the soap genre that they’re a part of.

Get some meta-humor going. Really push the envelope with the idea. Sort of an Airplane! type of comedy. Samms is the only genuine soap star in Delirious. Other than Raymond Burr and a brief appearance by Robert Wagner the rest of the cast are all comedic actors.

Even at one point I thought this soap universe was finally going to get completely out of hand after Candy writes a script drunk. Typos then become a reality! Awesome! But it’s only one or two jokes and that ends.

One upside in Delirious was the casting of Samms. I always had a crush on her and seeing her in this she does look gorgeous. So I enjoy watching her scenes.

The actors are all fine in this and try their best, but the script is the big letdown. It’s ironic a movie about a writer typing up stories is where Delirious fails itself. It’s almost as if the film is a rough draft of the story and they never got around to writing the full script or working on the big riotous scenes.

There are a few chuckles, but they’re far too few to make Delirious worthwhile. Other than my affection for Samms, the only thing Delirious really does is remind me how much I miss John Candy.

Here’s the trailer. There’s some shots that were cut from the final film, most notably Emma sporting white lingerie! How could they cut that??? That’s so criminal! 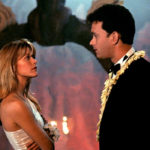