It’s an admirable approach to try to tell both conflicting versions of the story which will forever be a confusing history of who Lovelace really was and which interpretation to believe. However, the movie sadly doesn’t delve any deeper or offer any insight into Lovelace other than to dramatize the bullet points of her life from her account without examining them any further. In the end I felt like I watched a formulaic bio pic that played it safe and didn’t capitalize on the vast potential of the telling of the story.

The film never fully explains why Lovelace became so popular, why Deep Throat was such a cultural event or even manages to garner much sympathy for her at the sad situation she finds herself in. The flimsy explanation the film gives is simply she was raised to do what her husband says – no matter what. That kind of rationale doesn’t carry much weight with what she experiences at the hands of Traynor and explains why she would stay with him through it all. And even if that is the truth, the movie fails to convey the importance of this supposed life motto of Lovelace’s and the role her parents played in this belief.

Sargaard gets to exercise a bit more acting muscle from at first being an affectionate hustler in the beginning romancing Lovelace to turning into a violent, manipulative husband. At times it felt like he was trying to channel Eric Roberts performance in Star 80. He doesn’t have much more to do than fluctuate between those two extremes.

Pass on this and watch the documentary Inside Deep Throat for a more thorough and fascinating look at Lovelace’s famous film, the reaction to it and the story of the actress. 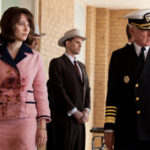