Rumors are circulating that Harrison Ford has signed on to reprise his iconic role of Han Solo in Star Wars Episode VII.

By the time you read this the rumor could be confirmed as fact or completely dismissed by all the parties involved. With the excitement and anticipation surrounding a new Star Wars film fans are sure to hook onto any small rumor and speculate about it to death until it turns out to absolutely true or not. Ford returning as Han Solo is just one on them on this long road to Episode VII and it’s currently the Star Wars news everyone is talking about.

I wasn’t planning on jumping into this discussion until I found out for sure if this was definitely true or not, but since I’ve been asked about my feelings about this news by some curious fans I figure I’ll pipe in for what it’s worth.

Honestly, I’m really not sure what to make of this. My first instinct is that this is not a good idea. As I’ve said before, I love the original trilogy, but I’m not sure I’m really that excited to see those characters in their elder years in a new movie. I’m not that curious to see where their lives took them after defeating the Empire and that big swinging Endor party. It might be a little too sad to see a softer and pudgier Han Solo. An Indiana Jones sequel sounded good at the time too, but then when it happened and I saw the elder Dr. Jones it took some of the wind out of my sails. Plus, if they’re making a new Star Wars trilogy why not focus on creating new characters for us to meet and go on adventures with and don’t try to rely on all that we know from the originals in this new trilogy.

The only way I could see this working with Carrie Fisher’s Princess Leia, Mark Hamill’s Luke Skywalker and Ford as Solo is in a cameo capacity or small supporting parts. You know, they pop up at a Senate meeting, offer some sage advice or something and do a short interaction with the new main characters of Star Wars. That’s how I would expect their returns to play out.

They would have to get their appearances done early in the film so they don’t completely take us out of the movie and we’re suddenly thinking how old these three look.

If this new Star Wars trilogy will follow the adventures of Han and Leia’s kids – which is another popular rumor running around – then an appearance by their parents towards the beginning of the story will make sense.

I guess I just don’t want Ford, Fisher and Hamill showing up in this new movie as just fan service to make audiences go “oh cool”. I would hope if they include the original actors in this new Star Wars they actually serve a purpose in the story instead of just their participation to be a cheap excuse to make new action figures of them and welcome back original fans who rode Star Wars off after those prequels.

Along with Ford returning as Solo, supposedly there is a Boba Fett and Han Solo prequel spinoff films in the works – or at least that’s what someone has asked me about. I don’t know. Maybe they could be good. It is pretty funny all these plans for Star Wars that Disney has been hatching – they’re not wasting any time. They’re certainly motivated to make all that cash back they paid Lucas for the rights to Star Wars and really want to make that happen as soon as possible it seems. They might be rushing into some of these projects though.

The one thing about Boba Fett, one of the reasons he’s become such a favorite character of Star Wars fans is the mystery surrounding him.

He only has like three lines in the original trilogy, but he still ranks as one of the most popular characters. Why is that? He looks cool with his armor. Being a bounty hunter adds some excitement about him. And because he’s this dangerous figure that we know very little about. I wonder if we’re given more of backstory to him and see him on solo adventures will that make some of the uniqueness to the character disappear.

I certainly didn’t become any more of a fan of Boba Fett after seeing him as a little kid! I think I actually liked him less after that…. 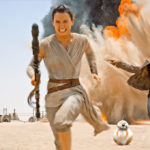 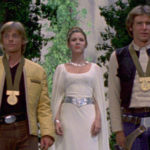 The Return of Ford, Fisher and Hamill in Episode VII 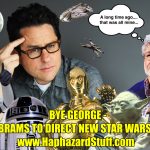