Thomas Jane is Peter Roberts a former race car driver that is now a lowly driving instructor in Australia. Then one day Simon Keller (John Cusack) is his morning driving student and robs a bank during their lesson. Peter is suddenly forced to be a getaway driver trying to avoid police and an army of bank assassins who really are anxious to make the two roadkill.

But there’s an upside to his kidnapped predicament, Keller promises Peter that if he can manage the driving needed and get him where he needs to be he’ll give him a hefty payment of $3 million dollars. Hey, maybe Keller is not all that bad.

Directed by sclockmesister Brian Trenchard- Smith Drive Hard is a really lousy, shabby looking actioner. The entire time I watched it I kept thinking ‘is this really the best that Cusack and Jane can do nowadays?’ Have they really been forced to goto Australia and star in cheap, badly made productions? It’s a pretty agonizing experience. It’s meant to be sort of an action/road/buddy movie, and I suppose it technically is, but it’s not a good one. We get two characters thrown together who gradually come to like and trust each other. There’s really no chemistry between the pair. Cusack and Jane just don’t click together. Jane tries way too hard to make the comedy work and awkwardly overacts the whole time. It all comes off incredibly forced and fails miserably.

Through the course of this adventure, Jane gets his driving mojo back after being neutered by his wife who forced him to quit his stellar racing career. He doesn’t win any sympathy for being a kidnapped victim or for his wife forcing him to give up race car driving. The only thing I felt bad for him about was Jane having to wear a horrible looking wig for the entire movie. Cusack offers him up marriage advice and Jane embraces this exciting predicament to get back to feeling all manly or something. Cusack is more likable and less sullen than I have seen him in a long time. He’s back in his Grosse Pointe Blank mode of playing a quirky, ‘nice’ criminal. His appearance with the puffing on electronic cigarettes, constantly wearing sunglasses, a baseball cap, driving gloves and his overall sloppy look, is less endearing and more offputting though. It’s as if he saw Jane was going to wear an ugly wig and he wanted to look unappealing too.

But he ends up acting as more of the screen Cusack I think of and shows glimpses of his unique onscreen charisma than him just looking bored and going through the motions as he has in so many of his recent movies. Once again I see Cusack and I’m rooting for him, but a few oddball lines can’t hold up the rest of the movie which comes crumbling down extremely fast.

Of course there needs to be more other than our main characters talking and driving, so the film has a crop of inconsequential supporting characters that you forget about as soon as their scenes end and don’t care about anything that’s transpiring. Cusack has his reasons for stealing from the big evil gangsters. It’s pointless and just muddies things up for no reason. This is the same boring presentation we’ve seen since the creation of cinema – big boardrooms, nasty guys in expensive suits who make phone calls to subordinates with orders to ‘find and kill our heroes’. This is where the actors have nothing more to do than stroll up to crime scenes, fold their arms, look serious, listen to what’s happened and move onto the next crime scene.

Along with Jane’s concerned wife and amused daughter they throw in some tired subplot about a corrupt cop. That takes about three brief scenes to be introduced and wrapped up. It’s incredibly pointless and should never have even been included.

This is all by-the-numbers action crap that we’ve seen thousands of times before and is presented here with no style and nothing worth mentioning. If they were smart they would have skipped all these petty details that further drag the movie out. They should have just put all the energy and attention into the the robber and race car driver driving. Oh yeah, the action. So Cusack has a brilliant plan of kidnapping a former racecar driver to be his getaway driver. That’s about as far ahead as he thought with this plan. Ok, so the idea doesn’t make much sense, but the movie could still have enough entertaining things in it to save it. The comedy doesn’t work. The subplots are painful. And lastly, the action sucks.

Most of the driving takes place on empty country roads at a leisure pace with no threat anywhere to be seen allowing Cusack and Jane to trade extended dialogue. You would think a movie entitled Drive Hard (not a good title by the way, it sounds like the next John McClane adventure and is it me or are a lot of movies suddenly using the word ‘drive’ in their titles) about an extended getaway from police and killers would have some decent action.

The film uses a lot of quick close-up shots of keys turning, guns being loaded, gear feet hitting the gas and wheels spinning as prelude to the action. This should make you anticipate that now we’re going to watch some real kickass stuff – don’t hold your breath.

The action is abysmal. It’s badly choreographed and not exciting at all. At times the high speed chases look like they’re reaching speeds of 30 MPH! Oh I’m sorry, we’re in Australia here – 48 KPH.

You would think the setup of kidnapping a race car driver to outmanuever carloads of pursuers would pay off with some decent car action, but the ‘stunts’ are yawn inducing.

Cusack could have saved the trouble of kidnapping Jane and have used a retired bus driver to manage this road pursuit. I think they didn’t want to risk some of these nice cars getting into a fender bender. Unless the filmmakers are just this bad at conveying high speed chases. It’s of cheap cable TV quality.

At one point near the beginning there’s a blatant flopped shot of Jane driving on the opposite side of the car during one of the first car chases. Once I saw that I knew the action wasn’t going to save this flick. By the time a motorcycle gang roll up to our heroes – in any other movie this would result in an exhilarating explosion of action that would warrant the movies title – I already knew full well not to expect anything and that’s exactly what I got.

The best I could say about Drive Hard would be some of the cars are pretty sweet looking. I don’t think even junky action fans will enjoy this at all. At best this could be something you put on in the background while exercising or doing some ironing. It would be something you occasionally look up at, but don’t have to worry about getting interested in. Then as soon as you’re done with your chore you immediately turn it off. There’s nothing here that’s going to make you want to keep watching until the end. 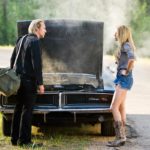 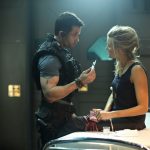