Around the time of the late 1980’s and the 1990’s a lot of television shows from the 1960’s and 70’s entered into the category of ‘classic television’. Thanks to decades of syndication they were firmly entrenched into nostalgic pop culture adoration. Their names were known by all.

It was time to start revisiting them, redoing them and make reunion movies of them!

A barrage of old television shows came hurtling back with a vengeance. They would hit the big-screen with updated casts and the inclusion of cameos by the original stars OR they would return on the small screen for TV reunion movies of the week with former stars stepping back into the shoes of their beloved characters for fans to reunite with them for a Sunday night.

The Brady Bunch took the former approach in 1995.

The sunny, hip, brightly dressed Brady clan are dropped in the 1990’s by director Betty Thomas. The world might have changed, but the Brady’s haven’t! They’re still somehow safely encased in their sitcom bubble where everything is still a shiny sitcom existence for this bunch.

But what about a plot? Well, ok the family has one week to come up with $20,000 for back taxes or else their family home will be auctioned off to the scheming neighbor Larry Dittmeyer. This is not good! The six Brady kids all work together to try to raise the money. In between ideas and worries classic moments from the show are given a twist in the jaded 90’s setting where the Brady’s don’t look so much like the perfect family anymore, but more like a wacked out bizarre one! What kind of family gets together for family trips to Sears and has potato sack races on their astroturf backyard?

I was always somewhat surprised by The Brady Bunch Movie. It ended up being much better than I initially expected. It had some very goofy humor. The cast were all good in their roles. There was some amusing satire on display all the expense of the out of touch Brady’s. It’s a fun silly movie.

Christine Taylor does a perfect Maureen McCormick impression. She’s pretty amazing. She has it all down – the voice, the mannerisms, the look. It’s like who would think the role of Marcia Brady would be given such an effort. My personal favorite of the cast is Gary Cole though. He not only nails Robert Reed’s authoritative ‘Dad’ voice, but he has such an oblivious attitude towards everything he makes me laugh as soon as he walks into a room. He gives his hokey inspirational, moralistic speeches with such insincerity that he comes off as complete goofball.

And even funnier is what he says could have been pulled verbatim from an old Brady Bunch episode. There he might have have been expressing the thoughtful lesson everyone learned from the last half hour. Here, it’s just downright ludicrous and you have to laugh at the mawkish sincerity of it all.

The movie has it’s fun pulling out the old famous moments from the series and instead of replaying them with any sort of reverence just plain laughing at them in the much more cynical 90’s.

One of the best moments is the arrival of Davy Jones at the school dance. On the show Marcia being able to convince the great Davy Jones to make an appearance was a real coup! But twenty-five years later the students are completely befuddled by this guy.

The story of having to raise money for the house taxes is simply a laundry line to hang scenes of the Brady kids being allowed to replay famed moments from the show in a completely different world. Their little misadventures are played for laughs instead of the earnestness they once were decades earlier. Cindy tattling with her lisp, Jan being jealous of Marcia, Marica being full of herself, Bobby landing a gig as a hall monitor, Peter and his cracking voice, Greg and his Johnny Bravo persona and of course all the kids singing. There’s of course the required cameos of the original cast slipped in. Michael McKean has some amusing scenes as the aggravated Mr. Dittmeyer, along with Jean Smart as his boozy sex-driven wife. Shelly Long might have been the biggest name attached to The Brady Bunch Movie at the time, but really I didn’t think she was anything special as Carol Brady. Henriette Mantel eclipses her being a pretty darn good Alice.

It’s a very satisfying comedy. I hadn’t watched this in years and it held up much better than I thought it would. I thought perhaps the fun novelty of goofing on the Brady Bunch in a feature film might have lost its charm twenty years later. Today everyone gets roasted, spoofed, parodied and played for laughs, but it’s still a funny movie. It’s much better than what a Brady Bunch movie probably deserved to be. 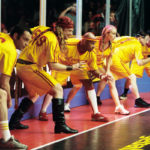