The latest entry in DC animated film division is an adaptation of 2008 comic ‘Superman: Brainiac’ by Geoff Johns.

A not-so-ordinary meteor lands on Earth. Inside is a robot drone that Superman quickly destroys. Superman’s cousin Kara clues Supes in that it belongs to Brainiac, a cyborg who destroys planets, takes all their knowledge and keeps a little miniaturized piece for his endless collection of cultures he’s eliminated. Supergirl knows full well what a threat Brainiac is, since her home planet of Kandor was a victim to his ongoing evil practices.

So Supes decides to go out to space and bring the fight to hm before he can even get to Earth. He discovers that Brainiac is one tough foe and won’t be so easy to defeat. He also finds a piece of Kandor that contains Kara’s parents still prisoners inside Brainiac’s museum of extinct civilizations. Can Superman stop Brainiac and save the Earth?

Superman: Unbound is a very entertaining Superman adventure. It’s an interesting story and the execution of it here effectively delivers on giving us all the action and drama that should be mined from it. Brainiac is no slouch here and he’s quite an imposing villain. He really gives the Man of Steel a run for his money and almost seems like he’s unstoppable.

Supes is not just battling this computerized villain, but also he has his hands full with the women in his life. Kara may have the same powers as Superman, but she’s traumatized with fear of Brainiac. She has to come to grips of standing up for herself and Supes in return has to learn to trust her more. Clark Kent’s relationship with Lois Lane is also hitting a crisis point. She no longer wants to keep her and Clark’s relationship a secret. The heck with what their co-workers at the Daily Planet think.

However, Clark is reluctant since his off-hours flying around, battling bad guys could put her in jeopardy if anyone found out his true identity. It’s the old excuse of keeping her safe, but perhaps she should have a say in that too?

DC animated movies seem to change up the styles of the animation from film to film lately. I suppose it’s a different artistic approach from story to story and whatever they feel would be the best way to present it. I always find it jarring at first, but after awhile get used to it. I was really impressed with how Lois looked. It’s the most attractive Lois I’ve seen in awhile in the animation world.

The voicework by the actors are all well cast, especially the women. Kara’s story is almost equal to the whole Brainiac coming to attack Earth one. It’s another entertaining DC animated movie. It’s funny how DC has had so much trouble getting the ball rolling in the live-action film department and the animation movies consistently have a level of quality that rarely leaves me disappointed. 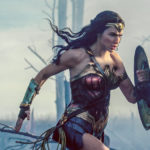