Maxwell Kirshner (Ray Milland) is a rich racist doctor who doesn’t have long to live and is up to some pretty strange experiments behind closed door. He’s figured out a way to transplant a head onto another body. It seems like a crazy mad scientist way to ensure his survival.

But there’s a hitch. When Kirshner’s health starts to fail he orders his head to be transplanted onto the unsuspecting volunteers body he shanghaied for this plan. Ok no problem. When Kirshner wakes up he finds his noggin on the body of black deathrow inmate Jack Moss (Rosey Grier). This is not what Kirshner had in mind!

This is is such a strange movie. Everything right on down to the crazy sounding title makes it one of those head-scratching movies where you’re left thinking ‘how did this ever happen?’. I still don’t fully understand it. It’s hard enough to imagine Milland and Grier would star in the same movie together, let alone in such a nutty one!

I can see how it ventures into being So Bad It’s Good territory for some. It’s such a unique, bizarre movie if anything you’ll remember it years after seeing it. That lasting memory won’t be for the quality of it though. The wacky sounding title itself will help to cement this in your head.

There is some sporadic goofy fun to be found and not surprisingly it’s when we get to see these two heads interact together. Milland tosses off racist remarks and Grier gets aggravated. They’re a regular odd couple. You would think that premise could fuel a ninety minute movie – even if it had to run on fumes towards the end. But there’s really not enough fun head to head butting of the two. I’d bet in almost every review or conversation about this movie the endless motorcycle chase scene comes up. Grier is trying to escape with dozens of police on his tail. With Milland’s melon on his shoulder he rides a motorcycle all over dirt highways resulting in a chorus line of cop cars crashing that would make Smokey and the Bandit proud.

It’s supposed to be exciting, and maybe at the time it was, but watching it now it gets tedious awfully fast. I don’t know how long exactly it goes on for but I wouldn’t be surprised if it chews up thirty minutes of the movie. What a waste. With a premise of a guy running around with a second head the best they could think up to do was car crashes?

While watching this I just couldn’t get a handle on how this came about. I always thought it looked really strange how they worked Milland onto Griers back shoulder. It’s such a awkward way the pair must of had to work together, that alone makes it kind of fascinating to see.

The wide shots are pretty funny since Milland’s head is so obviously fake. It kind of looks like a cheap Halloween costume you might see with someone sticking a mannequin’s head on their shoulder for a party. Thinking about it, I’m surprised this flick hasn’t gotten an updated remake yet. It would be something that I could see SyFy or some cable channel could do as a cheap special Halloween movie. It would at least be a different offering than all their giant mutant monster movies.

Yeah, there’s not much to be creeped out by The Thing With Two Heads. You’ll more likely be shaking your own head at it. 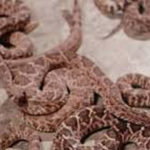