Crawford is a brilliant civil lawyer working a divorce case. When she demands a freighter to be paid as compensation to her client it greatly upsets villain Berkoff’s plan of using it as part of a money laundering scheme. He and his squad of bad guys set out to kill, her while Baldwin is the cop assigned to protect her.

That’s when the car chases, shoot-outs and explosions come in.

Fair Game is based on the novel by Paula Gosling, which was also used as the basis for Sylvester Stallone’s Cobra. The story is really nothing unique or special – beautiful woman ends up on bad guys hit list, cop protects her, they end up on the run, fall for each other amongst action set pieces. A movie could take that overall story and it could be enjoyable to watch – if it had exciting action scenes, fun dialogue and interesting, smart characters butting heads, trying to survive and romance (or at least sex) happens amongst the thrills. Great!

But Fair Game has none of the qualities to make it much of an entertaining adventure. It’s very by-the-numbers and forgettable. It’s hard to remember that the movie was originally meant to be a big theatrical action movie release with a budget of $50 million. Had this been made twenty years later, Fair Game would probably have ended up as a random action flick that popped up on Netflix with little fanfare.

The casting of Crawford, making her film debut, was the real hook for Fair Game – and she’s not too good. They were hoping with her name on the film and the sexy image of her on the poster, audiences might be lured to buy a ticket. They knew exactly that her image was what audiences wanted to see and they played along and exploiting her attachment. Her wardrobe consists of jogging outfits, tank tops and tight jeans. They stick her in the shower a few times and show her bare back while she’s changing shirts.

So, Crawford’s performance got a lot of the brunt of criticism when the film came out. She was the easy target, her face was plastered all over the place for the film and yeah, she’s bad in it, but so is everyone else! Dan Hedaya shows up briefly for one scene as a scruple-less lawyer. Salma Hayek is Baldwin’s fiery ex-girlfriend who behaves over-the-top angry. Christopher McDonald fills in as the loud, angry police captain. Jenette Goldstein plays her usual badass, deadly adversary. And Berkoff doesn’t get the chance to give a fun savory villain performance he could do so deliciously in Rambo: First Blood Part II, Beverly Hills Cop and Octopussy. He does the bare minimum and is just wasted. He does some bad American accent here and there which is really unconvincing.

And as for Crawford and Baldwin, they have no chemistry and just move from one scene to another without any buildup of tension or romance. They start off doing some bickering, awkwardly argue and then suddenly are having sex. In fact, their relationship jumps from her punching him in the face to kissing him so abruptly it will have you giggling. You might be asking, “Where did this come from?”. Well, it was written in the script boys and girls, so we’ll film it that way! In fact, they manage to get some nudity from Crawford – in a pretty ridiculous way. A bad guy has to stop with his attempt at killing the pair while their having sex in some moody blue lighting because he’s so distracted by seeing Crawford’s exposed boobs.

The dialogue ranges from routine to cringy. Some of the plot conveniences will make you roll your eyes and the action clichés pile up so high you’ll realize the only original thing the movie has to offer is having Crawford in it.

Computers were just coming into their own as tools in movies around this time, so naturally the bad guys can track the pair while they use their credit cards. Phone lines can be tapped and they can listen in, trackers are attached to vehicles. They also have some nifty thermal tracking gear in their arsenal to pinpoint just exactly where Cindy and Billy are in a building.

As is the norm for cop movies, the ones protecting Crawford in the safe house are more interested in eating their pizza and watching TV, than taking precautions when someone knocks at their door. This of course leaves them open to getting killed and forcing Crawford and Baldwin to go on the run. Baldwin’s cop friend is the only one he can trust, which jeopardizes his life. Actually, Baldwin has two cop friends who try to help him during the course of the movie and both meet an untimely demise. Wouldn’t one friend having that storyline have been enough?

Eh, nevermind that, let’s get to another scene of Cindy in the shower again. There was one moment that I thought was ridiculously pointless. Baldwin suddenly decides to handcuff himself to Crawford and immediately remembers he doesn’t have the key to them. Now that they’re shackled together, that shouldn’t cause too much of a problem as they run from bad guys right? Ok, now this will be an added hurdle for the pair, they’ll have difficulty navigating through some scenes, they’ll be forced to work together.

Actually, I’m completely wrong! The handcuffing doesn’t result in anything because in the VERY NEXT SCENE Baldwin shoots the cuffs off them. I didn’t understand the point of this at all. Maybe there were scenes of them handcuffed together that were just cut out.

I’ve read Fair Game went through a lot of re-editing and re-shoots after test screenings of it went so poorly. I’m not sure if they helped any. The film tries to keep up a rapid pace so you don’t question a lot of the logic to it, but it doesn’t quite work. There are many things that just come off nonsensical or just plain dumb. The only thing that makes it all somewhat forgivable is some of the action is passably entertaining. Silver did know how to bring action to the screen and some of the set pieces are pretty well staged. Probably the best is the car chase with the pair driving a tow truck racing away from the bad guys. So that’s a bit of a redemptive portion. But that’s really the only thing worth noting.

Unless you’re impressed by massive slo-mo explosions, which most scenes end on. I suppose another positive thing to say is that Fair Game is only 95 minutes, but you don’t really get much out of that runtime.

They might have had the intent to make a big-budget action movie, but it comes off as a low-grade exercise, with some spurts of slightly entertaining action. You’ll likely forget all about Fair Game completely as soon as it ends. Watching it, it’s no surprise that it tanked at the box office and became the first and LAST starring vehicle for Crawford. 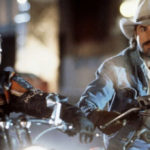