I wanted to pass along a recommendation of an oddball television program I have been watching in case you haven’t heard of it yet. It’s an entertaining and funny look at the seven wonders of the world through the eyes of Karl Pilkington.

To those who don’t know, Karl is the beleaguered friend of Ricky Gervais and Stephen Merchant. His unique, cynical and suspicious way of looking at the most mundane things helped propel their internet podcasts to heightened popularity, so much so that Home Box Office took the audio from it and animated it making the Ricky Gervais Show.

Karl is the real star though. His deadpan, complicated philosophies make him hysterical to listen to. No matter what the topic of conversation is he has a viewpoint and is more than willing to share it. He’s not easily impressed by much and doesn’t have a problem saying so.

Before setting out on his trip around the world and being told he’s going to be sent to see the Seven Wonders of the World Karl explains how he’s already annoyed by the term. “I’ll decide whether it’s a wonder or not. They always build this stuff up. ‘The Great Wall Of China’ – whoa, whoa, whoa, let’s just call it the Wall Of China, I’ll decide if it’s great or not ”. The idea of sending Karl around the world to see seven of man’s greatest achievements is part travelogue program, but more of a practical joke. It would be a real stretch to categorize it as an ‘Educational Program’. Karl suffers through his travels, not really enjoying much of anything.

He’s shocked by public bathrooms in China. The traffic conditions in India scare the hell out of him. He’s completely confused by the Wailing Wall in Israel. The usual stops a typical exploration documentary might skip is when Karl is at his best. A tourist bus ride to the Great Wall becomes a disgusting, awkward silent disaster. The ultimate destination is almost an afterthought.

Oh yeah, and the wonders….Karl does manage to get to them and his reaction isn’t complete awe like most programs of this nature. He’s got his own personal observations to share about them once he finally sees them and he’s not necessarily trying to sell you the idea that the experience of viewing the wonder is all it’s cracked up to be. If he doesn’t’ think they’re up to snuff he’ll say so.

An Idiot Abroad is now broadcasting Saturday nights on the Science Channel. Already it’s become the most watched program in their history. It’s the first time I ever tuned into it and honestly I didn’t even know I had the channel before hearing that’s where I had to tune in to watch An Idiot Abroadand I’m really glad I did.

There are rumors there will be a follow-up program, where Karl experiences popular things from Bucket Lists. I really hope he returns and the sooner the better! 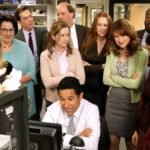 The Office Coming To An End…