With the release of Marvel’s The Avengers and the inclusion in the cast of Scarlett Johansson as Black Widow wearing a very tight black outfit, (she actually made her cinematic debut in Iron Man 2, but let’s not get technical) it got me to wonder if perhaps she will become the newest member in the ever-growing chain of hot sci-fi/fantasy girls that will make a generations head spin.

Will she become one of those female characters, while wearing such a sexy costume, make a strong impression with those young fans who are in their formative years. A ‘cinematic crush‘ that will help guide them through adolescence. One of those iconic females that would eventually be used as benchmarks in their minds of how they would define ‘sexy’, ‘gorgeous’ and downright ‘hot’!

It doesn’t seem like we have had any of those females in a long time. Sure, there have been hot actresses wearing sexy costumes in movies, but none that have made such a dramatic impact on those young male movie goers as was done a generation ago. Admittedly, I’m speaking as sort of an outsider in this. I could be completely clueless as to what famous females are setting the young folks hearts a racin’. Maybe kids nowadays have their own iconic ‘hot chicks’ that will be long remembered when they’re all grown up.

I guess I’m long past that stage in my life. Now when I see an attractive woman on film, sure she will make my eyebrows raise and I’ll take notice, but she certainly won’t make my head spin in the way the famous ‘hot chicks’ I remember from my youth. Are there any of these women today?

Take for example the Star Wars prequels. Despite Natalie Portman looking cute and even going so far as running around half a movie in a torn belly shirt she barely made a ripple. 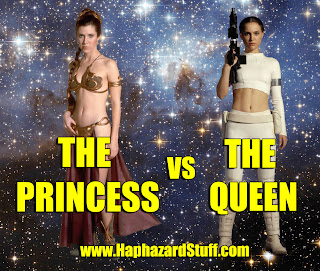 Compare that to Princess Leia’s gold bikini. No more needs to be said. When kids saw Return of the Jedi and unexpectedly saw our bun-haired Princess chained and wearing barely anything…..well that really made underdeveloped minds race with the possibilites!

To this day that outfit is burnt in the original fans minds. It was such a unique, sexy and memorable outfit (and she looked so good in it!) that I continue to see female fans turn heads when they wear it to a conventions thirty years later. I doubt anything worn by Natalie Portman in the prequels will have the endurance like that Fisher’s slave outfit has had.

Back in the ‘good old days’ everyone had their favorite famous chick. The first time you saw them they knocked the wind out of you. The timing was key too. While you had been playing with your friends, collecting your toys and spending a fun afternoon throwing rocks at girls, these women came along and suddenly made you consider the idea – “hey, maybe girls aren’t so icky afterall…..”

In the 70’s there were a bunch of television shows that starred gorgeous women, in awesome outfits. It was the decade of ‘Jiggle TV’. There were only essentially three channels and you didn’t have to go far to see well-endowed, sexy babes that would hold your attention despite the quality of the show.

Suzanne Sommers, Catherine Bach, Loni Anderson and of course Charlie’s Angels – any season – they all contributed to this trend. And prompted young boys to start collecting pictures of them, which they would strategically hide under their beds. The perfect hiding place too! No one would ever think to look there!

Farrah Fawcett’s bathing suit poster became this iconic image that was hung on the bedroom wall of millions of young, squeaky-voiced boys. That image kickstarted countless daydreams and fantasies of the prospects if Farrah had ever actually showed up in your room!

The sudden prominent spot Farrah got in your room didn’t go unnoticed by the parents either. It was very noticeable how suddenly your collection of robots and ray guns got tossed into the closet and Farrah graduated to the main vocal point in your room. Dad didn’t mind this redecorating plan.

Farrah might have been the most famous, but there were tons of ‘hot girl’ posters floating around in the 70’s and 80’s. Today I don’t think there are these significant one-dimensional signposts of puberty hitting as they once were. And really why would there be? Now a days, with surfing the internet those young curious minds can easily discover much more risque images and countless anonymous women in various states of undress with just a few clicks.

The closest comparison I can come up with to the Farrah poster sensation was back in the 90’s when the show Lois & Clark introduced fans to Teri Hatcher’s Lois Lane. The image of her wrapped in Superman’s cape – and looking to be wearing nothing else – created an enthusiastic buzz. Fans of the show made it their mission to get their own copy of it, which was easy enough with the internet. You just downloaded it.  She wasn’t hard to find.

Looking at it now it’s a pretty wholesome, innocent picture. You have a gorgeous woman and the famous Superman cape. How simple is that! The craze for it faded when magazines like Maxim and dozens of men magazines provided scantily clad famous women provocatively posing every month. They were sort of a softer version of Playboy, but they did provide access to check out the ‘hot chicks’ who were popular that month and gave them a moment to shine. 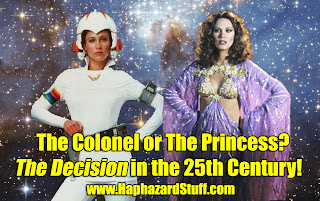 Let’s get into Sci-fi and superheroes. As kids tuned into  Buck Rogers in the 25th Century back in the 70’s they initially might have done so to watch spaceships and robots and Buck defeat the bad guys. What a surprise it was when Erin Grey as Colonel Wilma Deering appeared! Walking around the hanger bay in the tightest white outfit ever known, the Colonel certainly made the boys thrusters kick on!

On top of Colonel Deering, Pamela Hensly showed up as Princess Ardala! Holy mackeral! As if the mental struggle of choosing between Ginger or Mary Ann wasn’t enough, now you were torn between the good Colonel or the evil Princess! It seemed like a win-win dilemma really.

The one television actress who stood tops in my book was Lynda Carter aka Wonder Woman. Not only was she really the first female superhero kids would watch and fall in love with, but you were perfectly willing to let her save you! Egos went right out the window with her. You would gladly accept the helpless ‘Lois Lane’ role, screaming your head off with the bad guys ready to pounce on you, just as long as Lynda was there to swoop in, knock them out and carry you away in her arms! What a great episode that would have made.

Lynda is still tops in my live-action female superhero list. There are some great contenders from years earlier. Yvonne Craig’s Batgirl was a pretty hot addition to the old Batman show. And Julie Newmar’s Catwoman (the Catwoman who set the bar) certainly could make any young boy’s ears perk up. Her outfit, her attitude, the way she purred…..unreal. I don’t think anyone even cared she was a bad girl. In fact, I think that was a bonus!

In recent years, we’ve seen a steady stream of superheroines on film and TV. Many of these curvaceous spandex crime-fighters have been played by the most beautiful actresses around, but have they really gotten a huge response as their superheroic sisters of the past did?

It seems like fans hearts still skip a beat when seeing the newest lovely lady in her super outfit, but then they’re gradually forgotten and we move onto the next one. Perhaps it’s because we’ve gotten so many sexy superbabes lately that none are given a chance to leave a lasting imprint. (I never thought I would say maybe there are just too many sexy female superheroes….)

Over thirty years later those original fans are still crazy about Lynda Carter. Worship Julie Newmar. Bow to Carrie Fisher. Today, female heroes slip out of fans heads within a year, if not sooner. Live-action female superheroes don’t seem to even come close to reaching the heights of admiration the older interpretations have achieved. There are a few that I’ll hear mentioned every now and then, but none that will be talked about in a revered tone and will be reminiscence about as fondly as the girls are from the ‘good old days’.

Or am I missing someone….