A little over a month ago I decided to give the odd Where’s George hobby thing a try. It was prompted by finding a Where’s George marked bill that had fallen into my wallet somewhere during my daily transactions.

I suspect that’s how most ‘Georgers’ get started. A Where’s George bill happens to fall into their hands, they check out the website, think to themselves, ‘this seems strangely interesting’ and decide to give it a go of their own.

I’m happy to report today I was notified that two…TWO of my George bills were found and checked in on the website!

I was anticipating that when or IF any of my George bills I marked and released into the rotating hands of consumers it would take maybe closer to a year. By the time any of them resurfaced I would have dropped doing the Where’s George thing, forgotten about it until I would one day get a surprising email telling me someone actually received one of my bills and checked it in.

A little over a month isn’t too bad! And it wasn’t just one bill, but two of them were checked in on consecutive days! I didn’t think I would be this jazzed over this!

Ok, so my first George bill was received as a tip by someone at a pizzeria. Want to guess how far my George traveled from my hand to this pizza place in the fifteen days since he left my pocket? Approximately five miles. Oh what tales that George could tell. At least he made it out of my town.

My second George bill I spent while on vacation, so I know where I was when I unloaded him a month ago. If I subtract my own travel distance from carrying him in my wallet driving to this place I can get a better idea of how far he actually moved from me spending him.

And where has he resurfaced twenty-nine days later? This George sounds like he had a bit more interesting journey since he traveled about 25 miles from the area I spent him. The person didn’t leave any details of where they got him. The only thing they commented on was a unique stamp I put on him. I guess that stamp is what caught their eye.

So there you go – success with Where’s George! I have a lot more bills out there and I think I’ll make some more. These two hits have gotten me a little more motivated to continue this. I’m definitely going to have to use that stamp again. 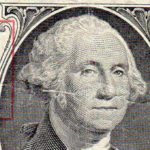 I Found A ‘Where’s George’ Bill!