I was fishing in my wallet for a dollar bill to use recently. When I finally grabbed one I noticed a weird looking stamp on it.

Since I was in the middle of a quick transaction – a toll booth of all places – I took another bill out and put this stamped one off to the side until I had time to thoroughly examine it later. I can be a curious cat on occasion.

Later in the day I unfolded this dollar bill and checked it out. Stamped in front of it was a message saying “Track This Bill at www.WheresGeorge.com“.

The back of the bill had a similar message.

It immediately clicked. I had heard of the Wheres George website before and had a vague idea of what it was, but never really bothered to look any further into it. This was the perfect opportunity to finally see what it was all about with this stamped George in my hand.

It’s essentially a website where folks can register their dollar bills – or any kind of bill I believe  – and follow its journey across the land and see where he ends up after he leaves your wallet. You enter its own unique information into the database, mark it, spend it and sit back to see if anyone whos hands he might pass through notices the markings and gets motivated enough to visit the website to see its history and update its status.

It is extremely easy. I went to the site, followed the links of having found a Where’s George bill and filled out his info to find out what I could about him.

This particular bill originated from an individual in Massachusetts where from he sent this George on his merry way until somehow he ended up in my wallet when I did the double take of him on the New Jersey Turnpike.

The most interesting thing was this George was logged into WheresGeorge.com and his tracking began 362 days prior to me finding him. Almost a year exactly! Pretty strange.

After this little encounter with George I got intrigued enough about this website to read a bit more about it. Apparently this has accumulated quite a following of enthusiasts since Where’s George began in the late 90’s.

There’s all different rules and rankings and scoring. It’s this whole thing. It does sound like an odd little hobby, but what the heck most hobbys are simply time wasters and are just diversions to do in your downtime. Once you really start to focus on it I can see how someone would get deep into it and really go to town sending out as many Georges as they can and the kick they get out of one of theirs getting found.

I think it’s a pretty cool idea. This is only something that people could do with the existence of the internet. Nowadays everyone has access to it. We’re walking around with it in our pockets, so it’s not like it would be too tough for random people to see one of these bills, get to wondering and do a quick visit to WheresGeorge and see the history of the bill they just got with their change from the supermarket.

Of course the trick is having them be curious enough to actually visit the site and do that little work. And then they have to actually notice the WheresGeorge markings. I don’t think people spend too much time looking at dollar bills too closely. I imagine most people if they do see the messages on them probably don’t want to spend the time to visit it or are reluctant to goto there and suspect it’s some kind of spam site or will infect their computers with viruses or something.

One downside is that so many people pay with plastic and debit cards today, actual paper bills don’t get touched by a lot of peoples hands as they used to. It’s crazy.

The other day I was behind a guy in a Quick Chek who was having problems with his credit card to pay for his purchase. What was he buying? One Yoo-Hoo. While I’m watching him and the cashier trying to get his card to work and the line of customers progressively getting longer the only thought in my mind was, “guy, carry some money in your pocket. A Yoo-Hoo should not be a major purchase.”

So I decided I would try WheresGeorge out. I signed up, registered some of my own George’s into the database, marked them, plan to spend them and see what happens. I imagine this will take an awful lot of patience.

I would love to be able to update everyone on where one of my Georges has ended up soon, but if this one George I found after a year of floating around the east coast is any indication – I might have an awfully long wait for one of mine to pop up. Keep your eyes peeled for them though. 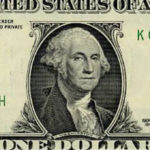