Rich father and son Big and Little Enos (Pat McCormick and Paul Williams) have an odd pastime. They enjoy wagering courageous truckers if they can bootleg a truckload of Coors Beer from Texas to Georgia in twenty-eight hours. If they can manage to succeed in this illegal task they’ll earn a huge payday from the Enos’. So far every one of them has failed. It just seems impossible to accomplish.

That is until the legendary folk hero The Bandit (Burt Reynolds) accepts their challenge.

Now with the clock ticking he and his pal Cletus ‘Snowman’ (Jerry Reed) are tearing down the highways in their black Trans Am and 18 Wheeler with the pedal to the medal, spinning their wheels, talking on their CB’s, picking up runaway brides (Sally Field) and trying to avoid capture by Sheriff Buford T. Justice (Jackie Gleason), who vows to catch that ‘sum bitch’ Bandit.

One of the biggest hits of 1977, the movie that started a craze of good ole’ boy car-themed movies and TV shows, and the character that people will forever picture first when they hear the name Burt Reynolds. I watched this movie a lot when I was little when it became a fixture on cable. Rewatching it I was a little surprised by how much I still enjoyed it. I figured it would still be somewhat entertaining, but I found myself really getting swooped back up into it all again. Sure it’s a movie very much of its time period, but it remains an awfully fun silly romp of a movie.

There’s nothing complicated about the story. Reynolds and Reed have a truckload of beer and have to make the run from Atlanta to Texarkana and back in 28 hours. Snowman has his truck with the stagecoach painted mural on the side and Fred his dog riding shotgun. Bandit has his speedy ’77 black Trans Am to run interference. His job is to scout out and distract any cop trouble that might come their way.

Early on The Bandit picks up Carrie (Field), nicknamed the Frog, who has just left Junior Justice (Mike Henry) at the alter. This provokes Sheriff Justice (Gleason) to track her down and thus making the legendary Bandit his mustache’d white whale. As the miles rack up Justice’s car gets more and more dismantled, Bandit and Carrie get more attached and a huge force of smokies come out to stop the big-rig and the Trans Am from meeting their deadline.

It’s a chase, a caper, an action-comedy and a buddy movie all rolled into one.

And it moves at a really good pace. Director Hal Needham manages to bounce from the Bandit and Frog to Snowman and Fred to Sheriff Justice and things never really slow up. The car chases and stunts are still knock out fun. They might not be the huge and epic over-the-top excitement like the Fast and Furious crowd are accustomed to seeing, but they’re very nicely put together. I still find they’re still awesomely thrilling to watch. It probably helps that the jumps and crashes were done for real in-camera. I imagine most of the time right after the scene ends the cars were hauled off as scrap and needed to be replaced.

Watching this now it’s all quite a contrast how car chases and stunts looked then compared to modern day movies. There’s no flashy editing or wild camera moves. There are fairly simple spinouts, weaving, cop cars trying to keep up and inevitably crashing with Reed’s country music soundtrack playing.

A lot of it unfolds at a pretty sedate pace. Bandit hiding in the convoy of trucks is a whole sequence built around just that maneuver. He doesn’t drive into one of the back of the rigs or land on the top of one, but simply hides alongside a big-rig as the pursuing Smokey passes right by him. And it’s an enjoyable scene.

There’s a slight detour as Snowman gets beaten up at a truckstop by a bunch of bikers. It’s something of a strange scene since it really doesn’t have much to do with the beer run. What makes it especially unusual is how after Reed is beaten up, the camera stays on him as he gets up, slowly walks back to his truck, we can see that he’s hurt and I realize – I feel bad for him. I like Snowman.

The scene builds slowly as he’s looking defeated, him and Fred get back in the truck and it ends with him getting his payback on those mean bikers, which involves his big-rig and their motorcycles all lined up nicely. You can guess what he does. The 28-hour time limit helps to add some pressure to get away from the growing number of smokey’s on their tail. I wish they had the definitive clock starting moment from when Smokey and Snowman start their journey. It’s kind of vague as to when the clock starts. Does it start once they get to Texarkana, after they load up the beer? I’m not saying a clock in the corner was needed but the start time and it ticking away would have helped add some added suspense.

There’s enough to hold your attention when things slow down and take a break from the wheels spinning. Whether it be Snowman dealing with his basset hound Fred, Gleason yelling ‘sombitch’ with his nodding son by his side and of course Reynolds and Field flirting with the countryside whizzing past.

The movie creates this whole fun CB culture with everyone in a truck, car or a roadstop getting in on action and following along with every mile of this adventure The Bandit and Snowman cover. It’s sort of like a reality show on the open highways for folks.

It’s no surprise how audiences wanted to get in on the fun and the movie helped fuel the whole CB fad. I imagine it wasn’t as much fun as the movie portrays. It was probably mostly wannabe Bandits and Snowmen talking nonsense to each other creating their own goofy handles. Gleason has some really funny lines. He makes a great adversary. He’s such a slob in the diner scene as he’s gulping down his sandwich and looking for the restroom with him casually saying, “I gotta take a squirt.”

I never understood how Gleason agreed to appear in this. It just seems like such an unusual choice for him with his background. My first guess was for the money, but I can’t imagine there was any way he would have thought it would be such a huge hit and Sheriff Justice would become one his most remembered roles – probably coming second to Ralph Kramden of course.

Junior played by Mike Henry I always thought was something of an unsung character in this. His dimwitted opened mouth nodding and agreeing with everything his Daddy says is pretty funny. He becomes a great victim to Gleason’s berating and causing his Daddy even more added aggravation.

I have to mention Reynolds who was soaring at his height of fame at this time. And yes, he’s awfully likable in this and I enjoy watching him make his wisecracks, romance Field and drop in his distinctive laugh every now and then.

It’s no wonder how audiences came in droves to watch him in this. He comes off as a real movie star in Smokey. Somehow the sequel made the Bandit a much less appealing a character. Not only was it a lousy sequel, but the Bandit was incredibly arrogant and pompous the second time around and I wasn’t any where near rooting for him like I was here. Field is fine.I always find her almost impossible to dislike no matter what kind of movie she ends up in. She’s looking very cute, but this was not her best performance and occasionally I find her grating and trying a little too hard to be goofy and funny. A lot of her little chatty character quirks come off forced. But it is what it is. I imagine she got involved in the movie solely because of her real life relationship with Reynolds at the time.

The music accompanies all this beautifully. I always find myself singing ‘Eastbound and Down’ after I watch this movie.

One thing that’s kind of funny is not only the vehicles that have become so iconic, but the costumes are so identifiable with these characters as well. Smokey and the Bandit is a great movie for cosplayers – which I’ve read they are out there. The outfits are all pretty unique. The Bandit, Snowman, Sheriff Justice, Frog and Junior in their wedding garb. If it weren’t for Star Wars that year Smokey and the Bandit probably would have gotten a fair share of kids dressing up as the characters for Halloween. 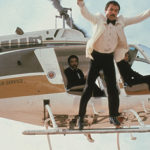