Ok, Halloween hasn’t even arrived yet. I was just beginning to face the fact summer is over, and enjoy the fall and get used to the Halloween decorations around. Seeing pumpkins sitting on porches, a few ghosts in windows and these stuffed witches that look like they crashed into trees (I don’t know when those suddenly became so popular).

So it really disturbed me to see one house with Christmas decorations up.

Now I’ve accepted this trend of having white lights up all year round. I suppose the reasoning is – if they’re white lights they could be for any holiday or for just plain old decorative purposes.

A lot of restaurants have these hanging up all over. I guess they think it adds a certain level of class to the joint. Now apparently homeowners have adopted this. So when I see a random bush all lit up with white lights I don’t think too much of it. I just assume they’re supposed to be there to celebrate the closest holiday at the given moment. It’s just a year-round decoration. This family has simply saved themselves the trouble of decorating for each individual holiday and of having to put up and take stuff down every month. It’s an All-Purpose solution to every holiday on the calendar.

I’ve also grown accustomed to seeing Christmas products pop up as early as August!. Yes, I’ve seen stores sell Christmas lights, wrapping paper and ornaments when people are still in the middle of their summer vacations! The logic of course is for stores to extend the Christmas/Holiday shopping experience thus making even more of a profit from it. It seems to be a success too, since this is not an isolated practice to just one retail store. ALL OF THEM SEEM TO BE FOLLOWING SUIT!

This extension of the holiday has been referred to as ‘The Christmas Creep’. The preparation and shopping for the holiday season has just been creeping up earlier and earlier on the calendar every year.

So I began to think this is caused by those greedy, money hungry companies who are trying to cash in on the most popular holiday and this mentality hasn’t infected some of us normal folk yet. A few of us still like to take the time to enjoy the present season and aren’t thinking that far ahead.

But then I saw the house with Christmas decorations up. At first I thought I was seeing things. Maybe I was mistaking Halloween decorations for Christmas ones. Nope. After closer inspection these were snowmen, angels and Santa Claus. The masses have begun following suit.

My feeling was it’s way too early to pulling out that stupid inflatable snow globe with the Grinch inside and putting it on your lawn. Why are people in such a rush? Can’t we just enjoy the Halloween atmosphere now and worry about Christmas in December. It already dominates the entire month of December, should we allow it take over the entire fall season too?

And what does this say about Thanksgiving? Does it even count anymore? Do people actually enjoy celebrating it or is it just a hump of a holiday you have to get over to get to the big one? This is the kind of stuff that makes me sick of Christmas long before it even gets here.

I would love to go to this house on Halloween and start singing Christmas carols on their lawn. 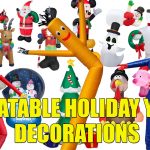