Oliver Stone tells the story of famed singer and poet Jim Morrison and the band The Doors, in a colorful, psychedelic bio pic.

Jim Morrison (Val Kilmer) forms the revolutionary popular band The Doors with Ray Manzarek (Kyle MacLachlan), Robby Krieger (Frank Whaley) and John Densmore (Kevin Dililon). They’re original sound and poetic dark lyrics propel them up the charts and make The Doors one of the most popular bands in the country.

Appearing on television and sold out concerts, they reach the top, then Morrison begins a crash downwards with his indulgence of drugs, alcohol and crazed behavior. His constant rock in his life is girlfriend Pamela Courson (Meg Ryan), yet even she cannot even stop his decline or his early death at age 27 in Paris, France.

Lets talk about the good: When The Doors came out my group of friends were excited. We went to see it opening weekend and it was a rock concert atmosphere for the audience.

The imagery is fantastic and some of the recreations of the concert scenes are mind-blowing. The main actors are all very good, especially Kilmer. I think he’s the one thing most will universally agree on about The Doors.

Kilmer channels Morrison in ways that quickly make you forget you’re not watching the real man. He becomes the ‘Lizard King’ and the sex symbol ‘God of Rock’. At the time Kilmer was applauded for his performance and there was even talk of an Oscar nomination. It’s no surprise, since he’s the main face of The Doors and is captivating throughout.

Then of course there’s the Doors music. If the film didn’t have it I can’t imagine how they could have done any kind of film about the band. It’s not like they could have plugged in stock rock music or written new pieces to emulate their sound. How crazy would that have been? While the film might be titled The Doors, it’s really more about the life of Jim Morrison. It gets to the point where Kilmer’s Jim takes the spotlight and the rest of the cast (and it’s really a good cast) gets sidelined. Michael Madsen and Billy Idol take on smaller supporting parts.

Ryan I always felt was the big miscast in the film. She does lend a sweetness to Pamela that is required, but other than that, I never thought she fit into the film as well as the other actors. She seemed to be cast simply because she was popular at the time. My problem with The Doors always came down to how Morrison is portrayed. It has nothing to do with Kilmer’s performance. He’s great with recreating the look, the mannerisms, the sound of Morrison that fans know. It’s just at a certain point Stone’s Morrison ceases to be about a singer and artist and the five year life of one of the most popular rock bands in history and just becomes the exploits of a crazy adolescent rock partier who goes to extremes.

Stone goes after recreating the wild legend of the man and doesn’t focus on the man himself. He becomes a caricature with little depth to him.

I’m not saying that that wasn’t an aspect to Morrison. His partaking of substances is well known, but it’s the portion of him that the film seems to only want to focus on and honestly, it starts to become quite repetitive. Once you see Morrison get drunk or stoned once or twice, seeing him do it over and over doesn’t add much more. There are points in The Doors where I don’t like Morrison at all. Stone manages to make this rock star idol really unlikable.

It’s strange, since Stone spoke and thought very highly of Morrison. He would say his story was not a ‘rise and fall’ tale. Morrison was never falling, but “moving through life as an explorer”. That’s a very interesting take on him. While everyone around him sees a man destroying himself, he’s experiencing things that most never would. Breaking through to the other side, so to speak. But I never got that impression from what we see him do. He just seems like a rock star bad boy.

Getting caught by Courson of him receiving oral sex in an elevator by a fan doesn’t seem like there’s much depth to his behavior. As I said, I don’t doubt that Morrison had those parts to him and it’s no surprise the film would embrace that sensational side to him since they result in very showy scenes, but it wasn’t all there was about him. I always wished the film would have slowed down on the rock star antics and had shown some of the other parts of his being that I’ve read he had from those who knew him. For all its aspirations of wanting to be a deep and rich hypnotic ocean of a bio pic, The Doors ends up as a shallow pretty looking puddle.

This is not a rare criticism of the movie. Along with fans, the surviving band members themselves, (Krieger and Densmore were involved in the production, Manzarek had nothing to do with it) had similar sentiments about the film.

Denis Leary had a funny quote about The Doors film – “Do we need a two-and-half hour movie about the Doors? No, we don’t. I can sum it up for you in five seconds, OK. I’m drunk. I’m nobody. I’m drunk. I’m famous. I’m drunk. I’m fucking dead. There’s the whole movie, OK?”

That’s not too far off the mark.

The other members of the Doors screen time becomes less and less as the movie goes on in order to make way for more Morrison manic scenes. It’s a shame too, especially with regards to MacLachlan’s Manzarek who appears to get set up in the film as Morrison’s closest comrade. The best personal moment between the two is their famed discussion on Venice Beach when Morrison shares his song lyrics with him for the first tie. After that, MacLachlan joins the others band members on the side of the stage. Outlandish like his witch wedding and a bizarre meeting with Andy Warhol played by Crispin Glover. That scene always seemed odd from the first time I saw it.

Some scenes play like camp extravagance. There’s Morrison’s witch wedding with reporter Kathleen Quinlan. Morrison’s absolute bizarre meeting with Andy Warhol played by Crispin Glover. I never understood why this eight minute scene was in here. Other than incorporating another 60’s icon in the film, it serves little purpose, only leading to yet another scene of Morrison behaving like a hedonist hurting Pam when she discovers him getting that oral sex by a woman. Then there’s the famous and outlandish Thanksgiving scene. It’s yet another extended scene that doesn’t lead anywhere. Watching the film, I would have much rather Stone had used the time that is wasted on these type of sequences for scenes of the Doors developing their unique sound or more detail of them putting together one of their famous songs. I guess that wouldn’t have been as showy, so the film falls back onto Jim behaving badly.

Indian Shaman follows Morrison through his life and is apparently leading Jim to his final fate. Rewatching the film, I kept having the scenes of Wayne’s World 2 pop into my head when it mocked the ultra-seriousness of the idea and images.

The accuracy is another issue. Stone himself has said he wasn’t trying to be realistic with the film. As I’ve said many times before, with films based on real people, real events or historical stories, I fully expect it to be an interpretation and artistic liberties to be taken. I get it. You move events around for dramatic effect, create composite characters, condense time frames. When it’s done well, it helps to tell the story. When it’s done poorly they become unnecessary changes that don’t amount to much and don’t serve the film.

The Doors has plenty of changes by Stone. I won’t go into them, but there’s a wonderfully researched video below that runs through the film and points out everywhere Stone went with fiction rather than real life with the film. So if you have questions about the accuracy of the film, the video will clear them up for you. It’s well worth watching if you’re a fan of the film.

Everyone has their own line when artistic liberties taken can supersede acceptance. Some might argue, “It’s just a movie! It’s not real life.” You might enjoy the film better if you view it as ‘Oliver Stone’s version of The Doors’, rather than a truthful telling of the band and Morrison’s story. That’s how I look at Stone’s JFK. Using that perspective I don’t let accuracy get in the way of my appreciation of what story they did decide to tell. I’ll admit, that might be giving the filmmakers too much of an excuse. Manzarek has said many times one of his biggest mistakes in his life was giving Stone the movie rights to the band and has been vocal about his opinion on Stone’s film, saying, “Oliver Stone has assassinated Jim Morrison.”

The Doors is an entertaining, good looking film at points. Of course there’s plenty of the Doors music and Stone uses it quite effectively. The trippy visuals of Indian shamans, starry night skies, the lights of the city match it perfectly. It’s practically a music video for The Doors catalog. There are indeed some eye-rolling and pompous scenes interwoven between thrilling concert sequences. Kilmer does a great job from start to finish as he plays Stone’s version of Jim Morrison. It may be a an extremely memorable performance, but I’d say there was much more to the man than what they choose to present in an exaggerated way.

Don’t expect to see a true to life story of the band or the man. The 2008 documentary When You’re Strange is a much richer and more accurate look at The Doors.

A very well done video exploring the accuracy of Oliver Stone’s The Doors. If you have any questions just how accurate the film is to the life of Morrison and The Doors this will hopefully shed some light on it.

The trailer for When You’re Strange 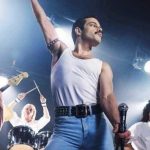