Philo Beto spends his time driving a truck, hanging with his brother and pet orangutan Clyde and earning some money as a bar knuckle fighter. He ends up meeting country singer. It seems like kismet, until Lynn runs out on him.

Determined to win her back, Philo and his crew travel the open road to find her. Unfortunately, he has also raised the ire of a gang of bikers and a cop who want revenge on him.

Every Which Way But Loose is quite the oddity when watching it today. It seems like such an unusual film for Clint to have starred in. An action comedy, a country/western setting, a jokey orangutan. It’s such an off-the-beaten-path image for Eastwood, that the idea seems like something to come out of a surreal dream than actually being a reality and being one of Clint’s biggest hits in his career. The script was supposedly given to Clint so he could pass it onto buddy Burt Reynolds. That casting makes much more sense. Every Which Way But Loose looks like it shook loose from a pile of Hal Needham scripts.

Yet, Eastwood took a liking to it and decided he wanted to do it. He did and Every Which Way But Loose became a huge success, ending up the fourth highest grossing film for year, behind Grease, Animal House and Close Encounters of the Third Kind.

It ended up being one of Eastwood’s most commercially successful films up to that point. Obviously, Clint saw past the odd idea of him driving alongside Clyde the orangutan and believed it would make an entertaining audience pleaser that escaped most people.

It’s still kind of a head-scratcher to me. I would’ve at least thought Clint would direct the film, just to use it to exercise his directing muscles that he was already doing at that point, but no. The film would be directed by James Fargo and Clint would simply act.

It’s a very simple, episodic type of film. Philo’s brother Orville (Geoffrey Lewis) sets up back alley fights for Clint as they drive around the San Fernando Valley with their pet orangutan. They hit bars and drink beer with country music playing on the soundtrack. They end up angering a biker gang called the Black Widows, who vow rot get back on Clint. Between punching big guys and swilling brewskis, Philo becomes smitten with country singer Lynn Halsey-Taylor (Sondra Locke). When things look like they’re getting serious between them, the commitment-phobic Lynn leaves town. Philo is determined to win her back and heads to Denver with his buddies. Toss in a few more punch ups on the road, Beverly D’Angelo tagging along with them and two cops who also are pissed at Clint.

Did I mention Philo’s mother Ruth Gordon is an irascible, vulgar, ‘take-no-gruff’ old lady, who continually takes and fails her drivers test.

That’s pretty much the movie. It’s basically a collection of side stories and comedic excursions that pop up through the main story, which is Clint trying to find Sondra after she walks out on him. Will you care whether Clint wins Sondra back? For me, not so much. Despite the two being a real life couple at this point in their lives I never thought they showed much chemistry onscreen. I’d even say, the love story is the weakest part of the film.

Most of the comedy is goofy silliness. The bikers in particular are complete cartoons and play things as broad comedy. They fall in mud, drive through car washes, crash their bikes. Clyde provides his funny bits – drinking beer, sticks his tongue out, kisses folks (the famous “Right turn Clyde”, didn’t come until the sequel). It’s little surprise Clyde stole the movie and became a star. Decades later Eastwood would continue to be asked about working with Clyde. It’s not sophisticated stuff. I think the most highbrow moment is when you hear the classic notes of Ennio Morricone being played when Clint encounters the bikers in a deserted alley. It’s an amusing nod to Eastwood’s past western persona, which makes a brief appearance before he pummels the gang.

There really isn’t much wrong with Every Which Way But Loose. It’s not swinging for the cinematic fences. It’s a rather harmless, dopey movie. It was probably a perfect Saturday night at the drive-in back in ’78 and it no doubt provided laughs for audiences and fans of Clint.

The weirdest thing about the film is Clint, who was one of the biggest stars at that point, starring in it. You’d almost instinctively think his career was on a decline and this was the only film he could get at the time. Ok, he wanted to try something new away from cowboys and Dirty Harry – this is what he settled on??? When I was little and would watch The Every Way films I liked them a lot, but now older I’m less entertained by them and more baffled by Clint signing up for them in the first place. I guess because of Burt’s skyrocketing career with Smokey and The Bandit and the trendy films with truckers, CB radios, car crashes and country music, Clint thought he’d try his hand at it.

Clint does looks cool in his t-shirts strolling through the movie. The bare knuckle fight scenes are entertaining. As silly and oddball as a gimmick Clyde is, he does generate laughs. Clint’s longtime girlfriend Locke performs some songs. The theme song by Eddie Rabbit is pretty good. Much of the biker comedy is eye-rolling and forced. It’s kind of a Three Stooges brand of physical slapstick comedy.

I suppose you could categorize Every Which Way But Loose as a ‘guilty pleasure’ movie. It might not be great, but it’s hard to be angry at the film and it can be a satisfying time waster. It certainly wasn’t designed to win awards, only to give a good time to audiences in 1978, get some popular country music on the radio and make a profit – which it really did! It’s meant to be harmless, silly fun.

I still wound’t say it’s a very good movie. If anything, it proved that Clint could play in the Burt/Needham pool and succeed. But compared to Smokey and The Bandit, Every Which Way Loose hasn’t aged as gracefully and isn’t as wholly entertaining. Although it’s certainly better than some of the Burt/Needham films. I’ll take either of the Every Which Way films over either of the Smokey and The Bandit sequels. It stands as one of Eastwood’s most bizarre career highlights. It’s certainly not as good as Escape From Alcatraz that he did the following year. I think the fact him playing the role of Philo Betto is more fascinating that he saw something in it that would strike a chord with fans rather than a script to be chucked in the waste paper basket.

Because of the monstrous success he had with it, Eastwood returned to make the sequel Every Which Way You Can two years later. I thought that was a bit better movie. 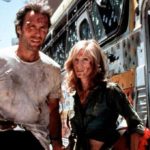