It would be nice to live in a world where everyone went out of his or her way to help each other out and people were genuinely appreciative of that assistance. No ulterior motives, no expectations or compensation and sincere gratitude. In the end everyone feels good!

This optimistic idea of ‘paying it forward’ is how it’s described nowadays, but it’s nothing new. It’s just being nice. And I’m not talking about sending some forwarded email crap with stupid requests to do something nice for someone this week that you forget about in thirty seconds. I’m talking about real life crap, going out of your way, getting your hands dirty and doing something that consumes your energy and time for someone else.

Not caring about sounding arrogant here, but recently I did a good deed for someone. It was kind of a pain and I would have much rather been doing something else, but I could see it would have really helped this person out. So I went out of my way, tried to help out the best I could, got this person out of a very inconvenient jam and things worked out in the end.

This individual was full of sincere appreciation. They actually went out of their way to express earnest thanks and because of that I felt really good for having done this. See we both felt good! And I didn’t even want any money from this! This was a classic, old-fashioned good deed story.

This helpful incident was in direct contrast to a few past helpful endeavors that I’ve done for other folks who basically….seem to just squander my goodwill and almost come off as if they were entitled to it.

It’s this ungracious attitude that really chaps my ass and makes me hesitant to do good deeds for some people.

And again I’m not looking to be placed on a pedestal with fanfare and accolades or compensation for any good deed that I might do, just some simple gratitude by them and not feel like my time and energy was wasted on someone who could care less.

When that’s the kind of attitude I feel like I get I want to ask them – “how many other people would have done this for you?” or reminding them that people get paid for what I just did for you! I’m not sure if they’re unaware as to how they’re coming off or completely disregard it or what. Whatever reason this line of thought seems to just escape some people. It’s boggles my mind how some people don’t express gratitude and can make you feel like garbage after doing a good deed. I just don’t understand their mindset. I’ve often thought they should squeeze in etiquette classes in school. Maybe try to impart the importance on thankfulness, respect, and manners. It’s a shame that this stuff would have to be taught to some people, but some of them really do need it!

Every now and then a good deed I do feels like it was really worthwhile and I helped someone who placed some real value on it and then goes out of their way to acknowledge it. I wish that were all the time though. It’s the ingrate’s who don’t attach any importance to it that I feel burned by and wish I never helped them in the first place.

You can be sure I won’t be picking up the phone the next time they need a hand with anything. I’ll take great joy in telling them to find someone else and that I have better things to do. 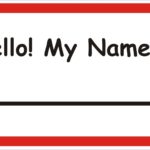 What’s the Etiquette For Name Tags?