Things are starting to look up for Bond 23. An ominous halt to work on the Daniel Craig’s third Bond film last year made the prospects of when we would see Bond return kind of up in the air. The producers couldn’t even provide a good answer as to when it might happen. Things really didn’t sound too good. Fortunately, some positive news has come out recently that has signaled the clouds might have lifted for fans.

A couple of proposed casting rumors have come out. Javier Bardem has been approached to the play the villain. He is apparently very excited to join the iconic villains of Bond past and is only waiting to read a completed script before committing to the film.

Another name actor being courted is Ralph Fiennes, who has been offered another role. No real details about the role, but it has been said it’s a “darkly complex” part and is “one of extreme complexity and only an actor of great ability and dexterity can take it”.

Director Sam Mendes is said to be intending to push the series in a new direction. “It’s the first generation of Bond films, and the ideas Mendes has push the film into darker territory where the characters are modern, mature and challenging”.

Fiennes is apparently excited by the “revolutionary” approach of the upcoming film.

It all sounds exciting, but then again what would we expect to hear now that Bond 23 looks to be moving again. Of course word from the filmmakers and studio is going to make it sound like the film is going to be the greatest thing ever. I’m keeping any expectations in check for now and wait to hear more news as it happens. So far only Daniel Craig and Judi Dench are confirmed to be in the film.

Fiennes being cast in a Bond film would be somewhat ironic. He was once one of the contenders for Bond way back in 1994, when the role eventually went to Pierce Brosnan. 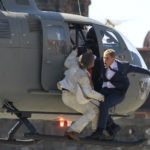 Bond 24 To Begin Filming in October